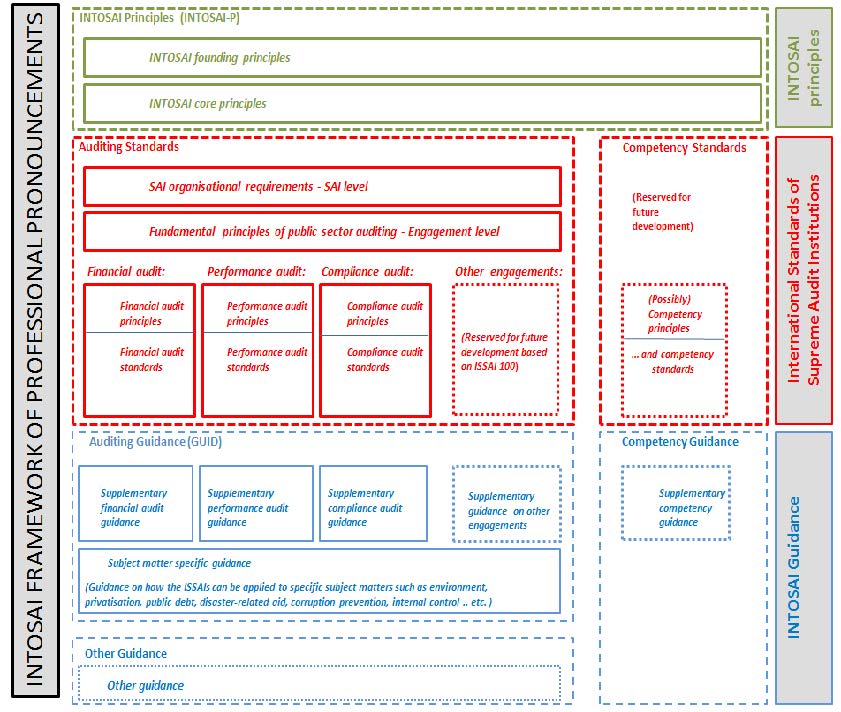 The Professional Standards Committee (PSC) has initiated a process to improve the Framework for INTOSAI’s Professional Pronouncements. The ambition is to have the framework in effect by 2019.

The INTOSAI Governing Board decided in 2014 to assemble a common forum of experts to address standard-setting issues across the full Framework of Professional Standards. This forum, now known as the Forum for INTOSAI Professional Pronouncements (FIPP), has drafted a proposal for a revised framework of professional pronouncements that will be presented to the Governing Board for endorsement at the coming INCOSAI meetinin Abu Dhabi, December 2016.

The purpose of the improved framework is to enhance the credibility of INTOSAI’s professional pronouncements, further the use of the ISSAIs as the authoritative standards for public-sector auditing and to provide relevant and practical guidelines for public sector auditors around the world.

The proposal reflects this purpose by seeking to:

The proposal has been drafted by the 15 experts in FIPP. These experts were nominated by INTOSAI’s members and selected by the chairs responsible for INTOSAI’s strategic goals on standard-setting, capacity-building and knowledge-sharing. FIPP made its first report to the PSC at the Steering Committee meeting in Copenhagen May 26-27, 2016, in the presence of the Goal Chairs for Capacity Building and Knowledge Sharing. The Goal Chairs and the PSC Steering Committee broadly welcomed the proposal made by FIPP.

Revision of a Success?

Although the current framework that was endorsed in 2007 has been a major success, it has now reached a point where it should be revisited. The current framework defined the two categories of professional pronouncements issued by INTOSAI—the International Standards of Supreme Audit Institutions (ISSAIs) and the INTOSAI Guidance for Good Governance (INTOSAI GOVs).

Since 2007, the INTOSAI Framework of Professional Standards (IFPS) has developed considerably. Taking into account the documents that are likely to be endorsed by INCOSAI 2016, we estimate that the framework will consist of some 93 pronouncements extending over some 3,100 pages. The framework has become too massive and is in need of clarifying the differences between the basic principles, standards and guidelines. The advantage of the revised framework is that it clearly identifies those pronouncements that require compliance from a SAI that wishes to claim ISSAI compliance in its audit reports and that it makes a clear distinction between the ISSAI-standards and non-mandatory guidance.

The INTOSAI community needs clear, practical and professional standards that can be put to use by its members. The revised framework will aim at doing this by strengthening the drive to enhance the effective and independent auditing process also underlined by the United Nations General Assembly in Resolution A/66/209, which stresses the need for “promoting the efficiency, accountability, effectiveness and transparency of public administration by strengthening Supreme Audit Institutions.”

The nuts and bolts of the revised framework

The draft proposal is illustrated in Figure 1: The Revised Framework of Professional Pronouncements. There are three large groups of documents within this framework. At the top level are the INTOSAI principles (green in color on Figure 1), including the Lima Declaration and the Mexico Declaration on SAI Independence. Auditing standards (the ISSAIs ) follow (red in color on Figure 1).

These are the requirements that would have to be fulfilled by a SAI that wishes to claim ISSAI compliance in its audit reports. Finally, there are the guidance documents (blue in color on Figure 1). These documents are non-mandatory and offer the SAI and the auditor assistance in implementing the ISSAIs, insights when planning, executing or reporting on specific subjects or tools for assessing ISSAI compliance, etc. In addition to these three overall groups of documents, the framework also includes space for future development of competency-standards and competency-guidelines (these appear to the right of the auditing-standards and auditing-guidelines in Figure 1).

In its current form, the proposal for the revised framework will seek to improve the credibility of INTOSAI’s professional pronouncements, assist in making them an authoritative framework for public sector auditing and enhance quality. The proposal is, however, likely to be modified, as it awaits comments by the INTOSAI members. Therefore, the following description of the framework is subject to change.

The revised framework will be titled “INTOSAI Framework of Professional Pronouncements (IFPP)” to reflect the fact that it includes documents other than ISSAIs (standards). In order to be characterized as ISSAI standards, a document needs to be in line with the requirements set out in ISSAI 100. By clarifying the overarching role of ISSAI 100, the fundamental principles of public sector auditing (component 4), it is possible to place the subject-specific guidance (that currently appears in the 5000 series ISSAI) in the appropriate place as supplementary non-mandatory subject-specific guidance that SAIs and auditors might find useful when carrying out financial, performance or compliance audits in the areas concerned.

Other documents may be included in the IFPP under other categories or linked to it on the ISSAI web site (www.issai.org). We propose that two other categories are relevant in the IFPP—the INTOSAI Principles (INTOSAI-P) and the Auditing Guidance. The revised framework reflects the need to reduce the number of ISSAIs that have to be implemented to achieve ISSAI compliance, thereby facilitating easier ISSAI implementation.