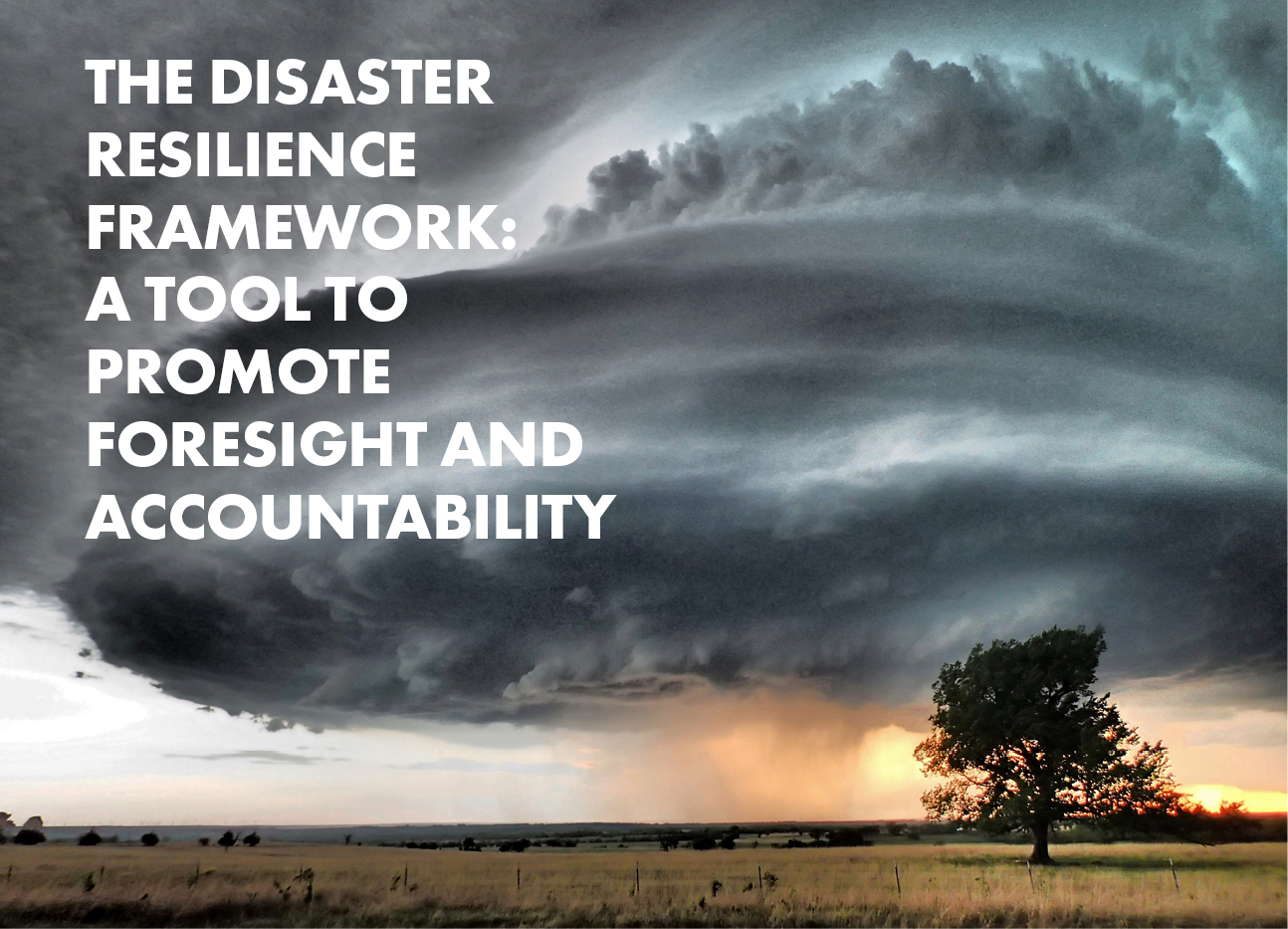 National governments are well positioned to help promote forward-looking approaches that blend the urgency of the immediate post-disaster environment with the rationality of strategic, anticipatory action.

Introduction
Natural disasters, such as hurricanes, flooding, and wildfires, have the potential to devastate people’s everyday lives by causing injuries and death, destroying homes and infrastructure, and wreaking economic havoc. From 2000 through 2019, there were 7,348 major disaster events worldwide, which claimed 1.23 million lives, affected 4.2 billion people (many more than once), and resulted in approximately U.S. $2.97 trillion in global economic losses.

Governments usually lead recovery efforts by providing disaster aid and coordinating the actions of different levels of government and private-sector stakeholders. These efforts can last years or even decades and cost governments billions of dollars. The resulting fiscal exposures are growing, as some natural hazards that cause disasters are increasing in frequency and intensity due to climate change.

However, governments and communities may be able to reduce the impact, risk, and cost of natural disasters—rather than just reacting to them—by undertaking intentional, forward-looking efforts to enhance “disaster resilience,” i.e., the ability to withstand and recover rapidly from disruptions caused by natural disasters and climate change. These efforts include actions to lessen the impact of disasters (“hazard mitigation”) and to address the actual and anticipated effects of climate change (“climate adaptation”). (See figure 1.) In 2015, the U.S. Government Accountability Office—the Supreme Audit Institution of the United States—reported that enhancing resilience to climate change could create up-front costs but also reduce potential future damages from climate-related events. Given the stakes, the accountability community can and should exercise its foresight capacity to steer governments toward approaches that make communities and infrastructure more disaster resilient.

To that end, GAO created the Disaster Resilience Framework, a tool designed to promote a forward-looking and whole systems approach to a complex problem set. The framework helps decision-makers and those in the accountability community identify opportunities to promote disaster resilience, and to reduce overall recovery costs and the impact on people’s lives.

A Long-Term Outcome Requiring Short-Term Investment
Enhancing disaster resilience involves investing time and resources in short- and long-term actions with uncertain outcomes, given that the return on these investments depends on where and how disasters manifest. During disaster recovery, when lessons are fresh and concrete, the political will to address disaster risk can be strong. With the right focus and resources, communities can confront devastation and destruction with actions that strengthen their physical and social resilience. At the same time, risk reduction decisions in the immediate and intermediate aftermath of a disaster—often referred to as “post-disaster mitigation”—are susceptible to insular interests and can result in missed opportunities to reduce overall risk at the community, regional, and national levels.

Conversely, the approach often referred to as “pre-disaster mitigation,” which involves making investments absent a recent disaster, can allow for thoughtful planning and avoid the pitfalls of reactionary decision-making. This approach offers opportunities for long-term, effective strategies to achieve system-wide solutions and partnerships.

However, a challenge of pre-disaster mitigation is that even when citizens and leaders have a rational understanding of the value of risk reduction, they tend to discount low-probability risks and be reluctant to engage in complex trade-offs without the visceral experience of a recent disaster. Moreover, leaders often target investments that pay off during their elected term, rather than those whose payoff is gradual and without guarantee.

National governments are well positioned to help promote forward-looking approaches that blend the urgency of the immediate post-disaster environment with the rationality of strategic, anticipatory action. In a context where decision-making is dispersed across lower-level jurisdictions and nongovernmental entities, national governments can also consider actions that would make investment in disaster risk reduction more attractive in the face of competing priorities.

Shared Responsibility
While governments often lead disaster recovery efforts, disaster resilience is a shared responsibility. In 2005, the World Conference on Disaster Reduction recognized that achieving “substantial reduction of disaster losses, in lives and in the social, economic and environmental assets of communities and countries,” requires “the full commitment and involvement of all actors concerned, including governments, regional and international organizations…the private sector and the scientific community.”

GAO’s Disaster Resilience Framework takes into account a variety of tools the U.S. federal government has to influence decisions and stimulate investment across an enterprise where it has little direct control. The framework is intended for use by a wide audience within the federal government, including people responsible for designing (e.g., policy makers, program managers, and specialists) and assessing (e.g., analysts, evaluators, and auditors) disaster risk reduction efforts. While designed for the U.S. context, other national governments and lower-level jurisdictions may also benefit from applying the principles outlined in the framework. Figure 2 provides examples, in the U.S. context, of tools national governments can use to influence and leverage the actions, responsibilities, and interests of all stakeholders. High-level Principles to Help Shape and Assess Action
The framework’s three broad, overlapping principles—information, integration, and incentives—can help governments incorporate actions that promote disaster resilience into the routine missions of specific entities, programs, and efforts (“mainstreamed risk reduction”), as well as define priorities in policy and investment at the highest level (“strategic risk reduction”). The framework also includes a series of questions organized around the three principles that users can apply to their specific context. (See figure 3.) Integration. Integrated analysis and planning can help decision-makers take coherent and coordinated resilience actions. For example, government efforts can leverage the expertise and resources of non-government partners, such as by using building codes and standards developed by the private sector in government efforts to adopt more robust risk-reduction measures.

Incentives. Incentives can help to make long-term, forward-looking risk-reduction investments more viable and attractive among competing priorities. Incentives can lower the costs or increase the benefits of risk-reduction measures, which can stimulate investment in disaster resilience by all levels of government, individuals, and the private sector. For example, incentives such as national government regulatory requirements or conditions of financial assistance could encourage local governments and other entities that own infrastructure to invest in disaster risk reduction.

These principles can be applied to any disaster effort—post-disaster, pre-disaster, or outside the traditional preparedness and recovery domain—as long as the goal is to identify forward-looking opportunities to leverage or influence risk-reduction actions, responsibilities, and interests across a whole system of governmental and nongovernmental decision-makers.